Exposed: Inexcusable Me . . . Irreplaceable Him

EXPOSED is a true modern day love story between God and a girl and the enemy who wants to tear them apart. 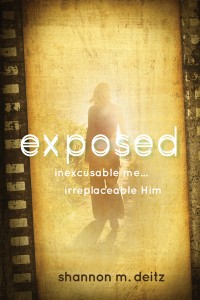 Shannon Deitz spent nearly two decades of her life in the darkest valleys of self-destruction, believing she was unworthy of God’s love. After witnessing as a child the sex and drug-induced downfall of her older sister, Shannon turned away from her Catholic faith and upbringing and found herself caught in a wild and carefree lifestyle. She drank, partied, and sought comfort in abusive relationships, only to be raped not once but twice—by two different men. Years later, after an intense spiritual battle within, Shannon found herself at rock bottom, where she finally understood the truth—that her life had never belonged to her. It had always belonged to God. He had given her the gift of free will, and although she had been tied to him since conception, he had wanted her to love him on her own.

Exposed: Inexcusable Me . . . Irreplaceable Him is one woman’s courageous journey down the path of spiritual self-discovery. Not only does this book expose the awful truths of physical and emotional abuse, but it also exposes the truth that, no matter how deeply our wounds may run, we will always be worthy of God’s healing grace.

This book offers faith-based encouragement for teenagers and adults who have suffered physical or emotional abuse. Through the extremely personal, no-holds-barred account of one woman’s journey down a self-destructive path, it addresses such issues as spiritual warfare, the need to be loved, and the need to relinquish control of one’s self to God.

Proceeds from Exposed: Inexcusable Me . . . Irreplaceable Him will go directly to help survivors of abuse through the Hopeful Hearts Ministry.

REDEEMED: The Story of a Marriage Torn by the Effects of Past Abuse & Restored by Faith

“Do not fear, for I have redeemed you; I have called you by name: You are mine.” 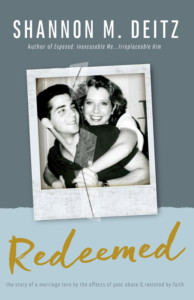 Everyone wants the fairy tale, but fairy tales don’t come easy when the marriage is battling to overcome past shame, sin and betrayal. Shannon Deitz divulges in the early struggles of her marriage to Neal as they overcome sexual intimacy issues, abusive behaviors toward one another that bleed into their parenting and the imminent threat of an extramarital affair and divorce. Redeemed reveals the self-destructive behavior Shannon was led into because of the shame of rape and guilt of self-imposed inexcusable sin. Shannon unfolds this truth through the continuation of her journey in accepting love, intimacy, worthiness, and forgiveness through the gift of marriage and motherhood. Redeemed portrays Shannon’s ever strengthening love story with God as she struggles to accept the gifts He has waiting for her and the courage it takes to trust when her spirit has been deeply wounded by the past.

“From her first book, Exposed, to her newest, Redeemed, Shannon Deitz has shared her remarkable journey of pain and suffering of sexual and emotional abuse. From the depths of despair and anger to the healing balm of God’s truth, this insightful message of endurance and forgiveness will resonate in your heart. Read this book and let your healing begin.”

Charles F. Finck, counselor, and author of As We Forgive Those-How To Forgive Others, Ourselves and God

“Shannon Deitz does a powerful job of opening her life and her marriage to readers. Her story, like all of ours, is full of mistakes, regret, and shame, but she masterfully shines the light on a mighty God who saves, heals, and redeems.”