A little less than a year ago I met a spunky, dazzling young woman at a local networking event. We were all discussing what we do for a living and later, when the event came to a close, she and I were getting to know one another when she confided that she was a survivor of the Columbine High School shootings.

Carly was a junior at the time, and finished out her junior year with her class once they all returned to school. They shared space with their rivals until the high school could be repaired. But before she could go back with her classmates and embark on what must have been a very difficult journey to return to the very school so many had perished…Carly’s family moved to Kingwood, Tx.

She hadn’t been back since, until last week. 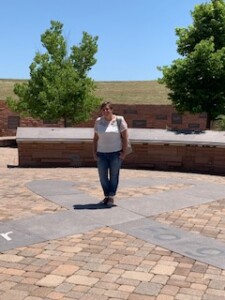 We met a few times over the past year, never fully discussing exactly what happened to her on that day but discussing the aftermath of what it continued to do in her life. That day, those moments of normalcy that turned to terror, had taken a hold of so many aspects of her life through triggers, blacked out memories, and the joy sucking bite of fear. I mentioned I was going to be in Colorado and if she wanted the opportunity to revisit the campus and retrace her steps I knew it could be a very cathartic, empowering experience. Immediately she jumped at the opportunity.

A few phone calls, background checks, validation of my credentials, and we set a date with the new principal of Columbine High school for a visit. I promised I wouldn’t take any pictures or exploit the school or the story of what happened in any way. My goal was to journey alongside Carly and allow her an opportunity to heal and take her power back.

With a few sessions of discussing what might trigger Carly the most, setting up a safe word and a safe, mindful place to retreat to in her mind if the visit made her too anxious, we were set to meet in the parking lot of Columbine.

That morning I got into Carly’s rental car and prayed with her. She was anxious, sitting in the parking lot. Kids were everywhere which shocked us both as we thought in the middle of the summer the school would be closed. Football practice was going on, band practice, etc.

As we entered the school she was explaining how it all looked the same. In the entrance we opened the door to the main office area to the right. It was now closed off with an armed officer sitting behind a desk. We explained we were meeting with Principal Christy and were told to take a seat.

In that moment, an ambulance pulled into the vestibule area and a man ran through the entrance we had just walked into hollering something at the ambulance. The officer jumped to his feet and went to see what was going on. Carly’s eyes glassed over and I could feel her tremble next to me. I reached over and grabbed her hand. “It’s okay,” I soothed but had no idea what was going on.

The woman in the office was on the phone and we heard that a janitor had fallen and busted his head open. Howls from a woman rang through the office as another female janitor was being led in. “There was blood everywhere,” she cried, her voice rich in an Irish accent. Two ladies were with her stroking her hair, trying to calm her down. The paramedics, on the other side of our closed office door, in the main entrance, ran through toward the scene of the accident.

I looked at Carly and could see she was going into full blown panic attack. Lord what are you doing here?I thought to myself as this felt like the worst scenario.  Thankful we had prepared for this I whispered her safe word and began to talk about where I would direct her to go in her mind if this happened. I asked her point blank questions and made her talk to me and tell me about this place.  I could see out of the corner of my eye the janitor being taken out in a stretcher so I kept Carly’s face on me and kept her talking. When he was out of sight, and I knew she had calmed down I had her take notice of the fact that the kids in the parking lot of the entrance to the school were still messing around throwing a football back and forth to one another.

“Look, those kids are smiling. They are safe. They are happy. No one is in danger,” I said.

She nodded and I could physically feel her body relax. “I see that. They are ok. They are good, life goes on,” she said.

A woman came into the office and turned to us. “Hi, I’m Shannon (not kidding her name was Shannon). I’m one of the assistant principals here. Mr. Christy is going to have to go to the hospital so I will be with you today.”

We all shook hands and when she led us into the main area of the high school she stopped and turned to Carly. “I want you to know that I was walking my son on that day of the shooting, we were walking toward the school. I understand and I want you to take your time here. Do what you need to do.”

Carly looked at me and whispered, “This is the blessing of what just happened.  I was worried Mr. Christy wouldn’t understand what I needed to do or that I would be able to be free with my emotions. I feel so much better knowing someone is with us who understands.”

From that point Carly first wanted to walk the school before retracing her steps. “I want to take the school back. I want to see that you all have taken it back.” 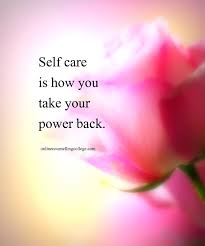 Shannon agreed and made sure to point out little things that were done nearly 20 years ago, like ceramic tiles that were painted by the students and teachers once they returned to the school. The tiles were strategically placed within the columns between the lockers and then some were along the walls through each hall. When we made it to the cafeteria, where the library used to be upstairs from the cafeteria, we were shown the ‘new entrance’ to the school and the mural on the wall and on the floor donated by previous senior classes, both pointing out the strength, perseverance and courage of the school’s spirit.

In place of where the library used to be (which was where most of the massacre took place), were 13 large paintings that hung from the ceiling, each a symbol of those who had perished. We stood there for a moment taking it, and the impact of that day, in and then turned to begin Carly’s real journey, the recreation of her steps that day.

In honor of her, and every survivor who has suffered trauma, I will not disclose what exactly happened to her that day. However, there are a few key moments I think are important to all of us on a daily basis. Carly first took us to her English classroom where that day they had watched a part of Great Expectationsand her teacher kept rewinding a certain part that she felt was hilarious and the rest of the class laughed only because the teacher was so intrigued by this very ridiculous moment. Carly remembers this because it was the last joyful moment associated with her time at Columbine.

The bell rang and she went to her next class which within a matter of maybe 10-15 minutes the chaos ensued. No one expects a tragedy. No one can predict when evil will tear through the normalcy of a day. What struck me the most was the time it took for Carly to realize that there was no false alarm, that the chaos going on around her was reality and not some stint or senior prank.

Its that moment, that precious moment when what once kept your inner equilibrium of safety, health, and security is suddenly pushed off it’s access and nothing makes sense anymore. It is this moment that can keep someone off balance for the rest of their life.

In the end, Carly stood in the spot she witnessed and felt evil, where she felt her life would end, and she spoke about it as if it was happening in that moment. Tears rolled down her face and fell from her chin, hitting the concrete as she relived it.

As tears for her and for all of those who had to live through that day, and especially for the ones who didn’t, pooled in the corner of my eyes, I could visibly see her demeanor change, as if she could float up into the sky. Her face no longer held a look of uncertainty but clarity. She smiled at me and wiped her cheeks with the back of her hand. “I feel so much lighter,” she said.

Shannon led us back into the office where Carly and I sat for a moment and she continued with her story of after the fact. The emotional reunion of her mother finding her in the crowd of students…. the fact she couldn’t go home because her house was only one street from the school and there was a threat of bombs that had been placed on her street and later they found out their roof was damaged from the SWAT team who used it to see directly into the library. 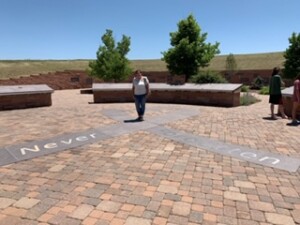 Later we went into the park that is behind the school where they set up the Columbine Memorial. We read each plaque in honor of those who’s lives were taken.

What struck me the most was the faith each one had. There were quotes from personal journal entries stating how much love each person who died that day had for God, for their friends and family.

The best way for me to end this healing moment I had with Carly is to include a note Carly requested I share with you: 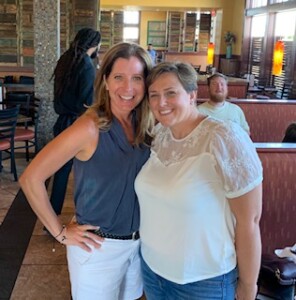 I truly felt Shannon was sent into my life by God. We NEED Hopeful Hearts Ministry. We need someone we can go to and rely on just so we know we are not alone. We all suffer and we all have trauma in our life at some point, yet we still feel alone at times and it’s nice to be able to have a person as an advocate to talk to, who listens to you, guides you, protects you and shares with you in your feelings and emotions and all you are experiencing.  The world needs Hopeful Hearts Ministry so we can all become better and know we are loved and understood. I am grateful for this experience.”